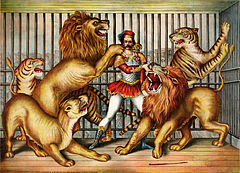 I think it's pretty clear now that crowdfunding through places like Kickstarter and IndieGoGo has totally changed the dynamic of small press publishing (and even the larger presses). Ever since traditional distributors changed the way they buy games, a publisher had to provide all the capital for a project upfront. This meant publishers had to bear the financial risk, but also had to carry the debt of the project until sales made it up. For some projects, this could take a while.

Crowdfunding is a great thing. I have a couple projects coming up and plan to give it a go again. The Labyrinth Lord Referee Screen was successfully funded through Kickstarter a few months back, which was great because that type of product is hit or miss. Some people love screens, some don't. Kickstarter let me raise the funds to cover the initial cost of printing. But I had a conversation lately with someone in which he said that he thought Kickstarter is kind of becoming a circus. I had some similar thoughts about some of the recent Kickstarters I've seen, but this statement got me thinking and I thought I'd see what opinions people have.

The circus issue is particularly in reference to stretch goals and the idea that "bigger is always better" when it comes to topping out as high as possible when the time limit is up. I think everyone would agree that stretch goals are a neat idea, and there is little doubt that they seem to "work" in terms of convincing people who may be on the fence to become a backer. But one real concern from a financial point of view is whether some backer rewards are "smart."

By smart, I just mean that the effort and monetary investment on the publisher side is worth the extra pledges. For example, if you have a $2,000 stretch goal that will cost you $1,900 to implement in shipping costs, production costs, and development costs (paying artists and writers), then in the end if you are a publisher what have you really gained from that stretch goal? I've spoken with more than one publisher who is concerned that the "stretch goal circus" may be setting unrealistic and possibly unsustainable expectations.

Which gets down to the heart of the issue. If you are a person who is planning to support a Kickstarter, what are your expectations? Are detailed backer levels enough, or at this point do you "expect" stretch goals? What sorts of stretch goals do you expect?
Posted by Dan of Earth at 7:32 AM

If I invest in a Kickstarter I am just looking to get the base product and really don't care about the stretch goals.

With that being said there are a few stretch goals that I thought were good idea (as long as they have a good return). For example the extra map booklet of Dwimmermount.

I liked SJ Games stretch goal of Car Wars simply because I thought it was a neat way of assessing interest to do that project. And I think it will work out because it a "classic" SJ Games game in the same vein as Ogre. I.e. if you liked ogre you will probably like Car Wars as well.

But like all tools stretch requires good judgment to use.

Dan, I've supported quite a few crowd funded projects (to include the Labyrinth Lord screens). For me, I'm usually not concerned about the stretch goals, but more about what comes from the backer levels. For instance, there was one project for an Aztec themed RPG that I helped fund. The core book sounded neat and the backer level I pleged to got me a color version of the core rules. Similarly with the Frog God Games Rappan Athuk funder. I wanted the Hard Back book, so I funded at that level. While stretch goals can sometimes be interesting; for me at least, they haven't really influenced me. Although I'll admit to upping my backer level pledge for neater items in the backer level (i.e. getting a personalized sketch, etc). I assume that the backer level items have already been accounted for in the main funding goal, thus not really subject to the "circus" effect that you described for the stretch goals.

I don't care about stretch goals either, they're just an added bonus if I get them.

I haven't contributed to any crowd-funded projects yet, but if I do, it won't be for stretch goals or added goodies. I prefer to consider these sorts of things as preorders; all I really care about is getting the product and if pre-paying for it will get it off the ground, then great. But I find myself a bit put-off by all the various funding levels and stretch goals and it actually turns me off of contributing at all.

Yes, I rarely consider the stretch goals, I either want the main product to get funded or I don't. But I may not represent the statistical norm.

I had a single stretch goal for my Kickstarter project (which was actually a shared stretch goal with Dwimmermount's Kickstarter). In my case, it wasn't so much a way to persuade people to support my project as it was to cross-pollinate between the two projects.

I've never decided to throw support behind a project on the basis of a stretch goal.

Personally, I find the constant addition of stretch goals can smack of hard-sell hucksterism, and that can turn me off. There's no magic number, but too many stretch goals just seem tacky; a lot of them should have been folded into the main project in the first place.

It depends on the level of support required to get the base product. Normally, I am really only concerned about getting the base product, but if I am expected to pay out cash that would be over what I might expect to pay for a similar product elsewhere, the only way I am going to invest is because of those stretch goals, which will make up for the extra money invested. So far, though, most projects that I have been interested in have been very reasonable, so those stretch goals have been irrelevent.

Nor am I much interested in the stretch goals.

In fact, some of the stretch goals can be off-putting such as extra classes, races and the like, as my tastes for such are kind of minimalist.

I do like the option to get the book in hardcover, though.

Were I to do it again -- I'm not planning to -- I don't think I'd include many stretch goals, if I included any at all. They have their uses, to be sure, but I also think they tend to detract from the original purpose of the Kickstarter and raise expectations in ways that are unfair to both backers and creators.

No doubt that stretch goals are a double-edged sword - they certainly add value to a project but they also add to the overall workload.

The whole idea of "value-added" I think has become part of the expectation, but that's ok as long as you enter into it with eyes wide-open.

I think we have also, very quickly, reached a point of saturation, so stretch goals can allow you to be creative and help distinguish your project.

Finally, I think the people who back your project deserve to be rewarded, above and beyond a book. After all they are allowing your project to happen.

I've supported several projects but I actually hate stretch goals. I would like to be able to evaluate a project up front and decide if it is something I want to invest in. Stretch goals make that more complicated

The LotFP hardback is a test case for me: there's nothing I would like more from LotFP than a Ken Hite penned adventure, so I'm almost tempted to fund it, but I don't want the hardback itself, so I won't. It's as tempting as it could possibly be but just not quite enough.

I am just looking to get the base product and really don't care about the stretch goals. I think of it as pre-ordering with the same caveat. Some people might end up not delivering.

Thanks for the comments everyone, they've been interesting!