Get the electronic file here and the print version here!

The book will go into distribution sometime early this summer.
Posted by Dan of Earth at 5:15 PM 10 comments:

Realms of Crawling Chaos...sooner rather than later!

Due to all the rest of the art arriving in fast time and some other factors, I'm anticipating the release of RoCC within the next several days to a week at most! I sent on the free preview to the Labyrinth Lord Society Organizer, Dave Macauley, and I'm sure it will go out to members soon.

Goblinoid Games to participate in the OSR booth at Gen Con!

Joe Browning of Expedition Retreat Press is organizing an OSR booth for Gen Con! They will be carrying Goblinoid Games products among the many fine products by other old-school publishers. See Joe's announcement here.
Posted by Dan of Earth at 10:57 AM 1 comment:

About a week or two before the release of Realms of Crawling Chaos, Labyrinth Lord Society members will receive a free sample of the book, one page from the spells section, one page from artifacts, and one from monsters.

We have 200+ members at this point, have you joined yet?

Rehashing is the new expression of house rules

There has been some talk lately about whether we are seeing too much "rehashing". Part of this (at least as far as I can tell) came with the announcement by Goodman Games about their upcoming Dungeon Crawl Classics RPG.

I think that's because we are inundated with so much more now than in 2006-2007, it's easy to forget the history of all this. The first two "true clone" efforts (as I define it here), OSRIC and Labyrinth Lord, were attempts not to rehash but to keep these two rule sets in print. This is an important thing to keep in mind, because at the time this was a completely new phenomenon. They were not created to put a new spin on anything, they were created to fill a niche that 3 and 4 years ago desperately needed to be filled. When these two rules sets were released people were still waiting to see if myself, Stuart Marshall, and to a lesser extent Matt Finch (who had by then basically left the OSRIC project) would be the canaries in the coal mine, whether we'd be sued into oblivion. When that didn't happen, we've seen a proliferation of systems with more in development.

There's nothing wrong with that. It's only natural now that people have the tools that they can take the work previously done and alter it to suit their idiosyncratic needs. This is the new way of expressing house rules. Why? Because why add your house rules to an existing system, when you can cut and paste a full rules set pretty quickly, rewriting bits here and there? You can make the rules "your own" in a sense. All of that is great. It's what open gaming is all about, and I am proud to have contributed to helping make that happen.

However, the part a lot of people haven't figured out yet (and the thing that IMHO is causing the angst) is that each time a new house rule rules set emerges no one is under any obligation to care.

I think people are feeling OSR fatigue. Their arms are getting tired from all the high-fiving, but it doesn't have to be that way. I'm not saying these efforts should be ignored, but not every effort needs to be so aggressively "supported" by the community. People don't need to feel obligated to buy everything. Open gaming has revolutionized how people approach their home games. We're going to see so many of these tweaked games from here on out that trying to keep track of them much less buy them all will be futile.

As for Dungeon Crawl Classics, I wish him all the best in the effort. I really, truly do. Just as the old-school rules are being rehashed, so have the d20 rules for a very long time. Everything from True 20 to Castles & Crusades and many in-between keep rehashing, simplifying d20, giving it a twist here or there. Sounds familiar, doesn't it? Will another rehash of d20 stand out? Who knows? But Goodman Games has the same right as all of the OSR publishers who want to put their own stamp on the rules.

This is all really about the fact that for the first time in the 30+ year history of RPGs the gamers have the tools (easy POD and electronic publishing) and freely available source material (OGL, all the SRDs and open content rule sets) to express themselves. Let them! We just need to let go of the idea that we have to pay attention to all of it. We just can't. Let it take on the life of its own that it inevitably will, and create the kind of stuff you want to see. You can only create what you're passionate about.
Posted by Dan of Earth at 2:45 PM 16 comments: 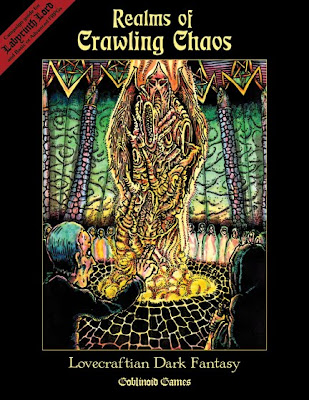 I started this project in the late spring of 2008. It took a backseat for a long time so I could get other projects done (not to mention a pesky dissertation) but with no more further ado...

Evil cultists consummate their union with Shub-Niggurath in dark woods no other mortals dare go. Alien terrors lurk in the underworld; their vast riches wait, or their incomprehensible powers could leave you broken, dead, or worse. Adventure in underworlds filled with horrible entities, or the ruins of alien beings that enslaved the ape-like ancestors of mankind. Seek hidden secrets from the arctic wastes to dark, briny seas. But as you approach the ocean, what are those strange longings you feel?

Realms of Crawling Chaos is a Lovecraftian Dark Fantasy campaign supplement for Labyrinth Lord and the Advanced Edition Companion. Referees can incorporate the new material into existing campaigns, or design an entirely new milieu of gritty sword and sorcery gaming.

In this book you will find:

New player races from the works of H. P. Lovecraft, including white apes, white ape hybrids, sea blood, and subhumans. New races are presented both as race-class options and as races for use with advanced classes.

New artifacts and a system for designing unique artifacts

Written by Daniel Proctor and Michael Curtis
Posted by Dan of Earth at 4:19 PM 21 comments:

Labyrinth Lord and the Advanced Edition Companion sold out!

I've been anticipating another print run and I got confirmation a few days ago that these have sold out of the warehouse. More print runs on the way!
Posted by Dan of Earth at 3:35 PM 11 comments: