Now that Gamicon in Iowa City is only a few weeks away I wanted to let people know that there will be a Goblinoid Games booth at this convention. I'll be manning the booth and running pickup games of anything that catches peoples' interest. The booth will be stocking most of my product lines, with a few extras like Pacesetter and Timemaster t-shirts and other swag.

So if you live in the midwest and like to hit some of these smaller cons drop in and say hi! The Iowa House Hotel has some great convention rates and is directly connected to the convention building. Be sure to call them and ask them about their Gamicon rate, last I checked it is very cheap and you'll get a better rate by calling than by booking online.

Hope to see some of you there!

Also I'll be at Fire & Ice in Manitowoc, Wisconsin, Feb. 24-26. I'll post a reminder about that one as the time approaches.
Posted by Dan of Earth at 9:21 AM No comments:

From the mists of the 1980s a familiar brand reemerges...

It is with great pleasure that I announce that Goblinoid Games has purchased the Pacesetter logo and brand. The familiar Pacesetter logo and Pacesetter System™ brands will be used to identify our game line that includes TIMEMASTER, ROTWORLD, and other forthcoming games using the same universal Action Table for task resolution. 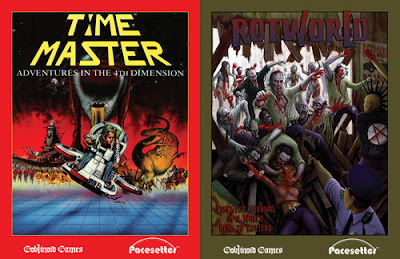 In one corner we have Wizards of the Coast warming up their new contender for heavy-weight champion of the table-top fantasy role-playing game market. In the other corner we have Paizo, continuing to train their champion Pathfinder, who dethroned the D&D brand when 4th edition alienated too many of its fans.

Only one will leave the ring.

One of the issues that I think has either been obfuscated or just plain ignored is that more than anything else 5th edition is a response to Pathfinder. Whatever else WotC may say about including older editions in the new edition's design, they won't be a priority. They can't be. The ideological gap between old-school D&D and 3.5/4th is just too vast. There is no way to bridge that chasm. No, this is a heavy weight match for the big title. At the end of the day it won't impact old-school gaming in the slightest unless part of their strategy is to reprint older editions. Nothing short of that would bring fans of all editions back.