It's a true shame that Pacesetter went out of business when it seemed like they were just hitting their stride. Of the products they published, it was really only CHILL that went on to enjoy future support, but the second edition used a revised system published my Mayfair Games.

I think if Pacesetter had survived longer the Action Table system would have become better known. It is a real gem, but if it suffered in any way other than its short published lifespan it was only because it is quite different from anything else and probably needs to be introduced to a reader in stages rather than all at once.

At its heart the system is a percentile system. I talked about attributes and how skill percentages are determined in the last article. Whenever the outcome for an event or action needs to be determined, like skills, paranormal talents, or some other kind of roll like avoiding the effects of poison, the player or referee will roll percentile dice.

There are two kinds of these checks. One is called a "general" check and the other is a "specific" check. If the check is a general check, you are only trying to roll equal to or less than the target number. Some skills and paranormal talents work this way, where you are only interested in a binary success or failure. So far that sounds pretty familiar, right? These kinds of rolls are common to pretty much all RPGs. The specific check is where things are different. Refer to the Action Table below (thanks Tim, I borrowed the one you posted on your blog!): 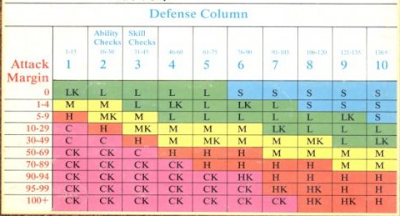 So let's say I'm rolling against my Gambling skill of 74%. You'll note that on the Action Table there are 10 columns under Defense Column. Usually skills use Column 3. If I roll 44 on 1d%, I subtract 44 from 74, with a result of 30. Looking at the Attack Margin Column I cross-reference a margin of 30 to column 2. The result is "C". What that letter means for a specific check when dealing with skills or paranormal talents is specifically tailored to the skill or talent. In this case it allows me a big bonus to cheat at gambling. Yeah me!

You will also note on the chart that ability checks usually use column 2. Sometimes a referee might decide a task is harder than usual and require a higher column number to roll on, thus limiting the degree of success that is possible.

But what about combat? One of the differences between the Action Table system and most other games is that essentially all weapons do the same damage. This was one of the hardest things for me to wrap my mind around at first. Most games are what I would call "front loaded". Damage is decided by perceived lethality of the weapon, and generally skill of use does not affect damage even though ability adjustments might. So a sword in the hand of a 1st level fighter in Labyrinth Lord will do the same damage as a 5th level fighter or even a 15th level fighter, though increased skill may be reflected in additional attacks at those higher levels. But with high skill also comes more attacks in the Action Table system, too.

But the Action Table system is "back loaded". Rather than split hairs about whether something deals 1d6 vs. 1d8 damage, the degree of success in a skill roll determines how well the weapon is used. When fighting melee combat the attacker matches the defender's equivalent skill percentage to the range of numbers above the Defense Column to see which column results are used. So for example, if I'm attacking someone with a sword, we use the defender's sword skill percentage to determine defense. This makes a lot of sense. He can use his skill to parry, anticipate my actions, and deflect damage. If the defender does not have the particular skill that the attacker is using, then he uses his Unskilled Melee ability (which all characters have) to decide the defense column.

So what's happened here are three things. The Action Table will have accounted for the attacker's skill when looking at attack margin, at the defender's ability in using his skill to decide the defense column, and third, the defense ability is also accounting for the ability to dodge or parry. So many games have a separate dodge skill, which in my opinion is a terrible way to handle dodge or parry. It often results in an endless combat circle of "I hit!" - "Wait, no you didn't, he rolled his dodge skill!"

Missile weapons, including everything from bows to laser guns, work just slightly different. There is a wider margin of chance for melee weapons. The defender does not use a skill to determine defense column because there is no chance to parry and dodge in the same way one might in a knife fight. Instead, chance plays the role here and the defender rolls a d10 to decide which defense column is used.

Aside from some situational modifiers, that's pretty much it. The Action System is actually not so complicated. You could sit down and play right now with this basic understanding. It is quite elegant in its ability to handle many situations within the table. Now of course, there can be more to it. There are various situational modifiers that many RPGs have that cal alter your skill roll. Characters with high strength can inflict more damage in melee combat, etc.

In this system characters have both stamina points and wound boxes. When wound boxes reach zero a character dies. When stamina reaches zero the character passes out, which could make him as good as dead depending on the situation. This is a gritty, deadly system.

I haven't decided yet if there will be a "Part 3" to this series. Maybe I should open it up to questions. Does anyone out there have any questions about the system? Has there always been something that baffled you about it? Just want a clarification? Fire away!
Posted by Dan of Earth at 3:13 PM 2 comments:

The day of mass consumption of turkey flesh approaches, and what a better way to celebrate than by role-playing that you are fighting against undead flesh eaters! But they're after an entirely different white meat...

Now you can buy a perfect bound or hard cover print copy of ROTWORLD!
Posted by Dan of Earth at 4:19 PM No comments:

Over the years there have been a number of requests for Goblinoid Games to publish a referee screen. I've launched a Kickstarter for this project, so drop on by and pledge your support! We're also offering signed screens exclusively through this Kickstarter opportunity.
Posted by Dan of Earth at 9:18 AM 7 comments:

The Pacesetter house system, also called the Action Table System (ATS), was used in TIMEMASTER, CHILL (1st edition), Star Ace, and Sandman. Pacesetter was a company started by Mark Acres and colleagues, who broke away from TSR in the early 80s. There was a period in the early 80s where game companies were trying out a slightly different approach to RPG systems by using a chart from which most game resolution would reference.

As many readers already know, Goblinoid Games is the current owner of TIMEMASTER, and recently released ROTWORLD, a zombie survival horror game, using the same system. ROTWORLD is the first in a series of RPGs for this system that will cover various genres.

One of the things that separates ATS from other chart systems is the wide applicability and granularity. The system is gritty, and manages to be a functional universal system without feeling like it makes sacrifices in resolution complexity. This is (in my opinion) where some other universal systems (chart-based or not) fail. This post is the first in a series of posts where I talk about the system and some of my thoughts on its applications and strengths. Many people are unfamiliar with the ATS or haven't looked at it for many years, so this series is a way to bring everyone up to speed.

Characters are built based on eight basic abilities: Strength, Dexterity, Agility, Personality, Perception, Willpower, Luck, and Stamina. These abilities are generated initially by rolling 3d10 and adding together the results. This produces a bell curve, similar to using 3d6 in Labyrinth Lord. However, the ATS is a percentile and d10-based system, so to get these scores within that range the sum generated for each ability is doubled, then 20 is added, producing a range of 26-80. This is important because skills reference these abilities and ability checks also need to be applied to a range compatible with a d%.

All of my readers are familiar with RPGs, so these abilities will be self explanatory for our purposes. However, the Luck ability is something a lot of RPGs don't have, so I'll say a few things about that here. Luck can be used by a PC to reduce damage dealt by attacks. The Luck score generated at character creation can be permanently reduced to avoid damage. I like this mechanic because it meshes well with my old-school system sensibilities. Luck mechanics in some other games are bottomless pools. In the ATS, Luck is a very useful resource, but it is a resource, and when a PC is out of luck, well....he's out of luck! A character's Luck can also be used by the referee as a base percentage chance for a PC to avoid death in certain situations, or to simply have a lucky break at some point.

In the Action Table System skills are percentile-based. Each skill references one, two, sometimes even three, basic abilities, and is divided by the number of contributing abilities. So for example, Wrestling is Strength+Agility, divided by 2. Then, characters will have a level in the skill. There are three levels, Specialist, Expert, and Master. They grant +15, +30, and +55, respectively, to the base skill percent generated by abilities. At character creation a character can buy a skill at Expert level, but only through play and experience points can he raise it to Master.

One important and refreshing thing about skills in this system is that characters will start with only a few skills. Some skills default to abilities, and so they can be performed by anyone. I like skill-based systems generally, but when a character becomes a laundry list of 30 skills it is not just cumbersome in play, but it reflects a system philosophy that tries to identify a skill for about anything that a character can do. In my opinion this is the root of the problem with most people who dislike skill-based systems. So many mechanics are placed into skills that all characters have to be encyclopedias of skills. So ATS gets this right in creating a balance between having a smaller number of meaningful skills, but also in having a system that does not put characters in a straightjacket for doing other things not defined by skills.

Paranormal talents (PTs) are supernatural abilities possessed by some characters. Obviously, these will not always be available to characters depending on the specific implementation of the ATS and the genre of game. For example, they are always a part of TIMEMASTER games, but are purely optional in ROTWORLD. The PTs available are not always the same either between games. PTs function in a similar manner to skills, being based on abilities and used as a percentage roll for resolution. The number of PTs characters start with also varies depending on the game, but in general characters start with only one or a few, and can buy more with experience. Using PTs costs Willpower. Characters have a fluid pool of Willpower that is based on the Willpower ability, and they regenerate points with rest.


This is where I'll leave the discussion for now. Next time I'll start to actually get into the Action Table and how skills, PTs, and other actions are resolved.
Posted by Dan of Earth at 11:10 AM 11 comments: