I got the perfect bound proofs in today, and they are now available at the Goblinoid Games print store.

I should get the hard cover proof in by early next week.
Posted by Dan of Earth at 12:45 PM 2 comments:

I just wanted to offer a friendly shout-out to Samwise for his YouTube reviews of Labyrinth Lord. I always find it interesting to get the perspective of a gamer who is more accustomed to post-2e D&D. Here are the links to his two part review...

Goblinoid Games takes you on a trek to the stars. 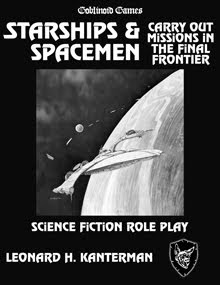 Back in 1978 the second sci-fi RPG ever to be published was released by Fantasy Games Unlimited, Starships & Spacemen, by Leonard H. Kanterman. Inspired by many sci-fi influences, Starships & Spacemen trekked new ground. You could play a Tauran with a machine-like, logical mind, and adventure in space hunting for alien treasures on unexplored worlds. You might face the aggressive Videni who resembled Taurans in appearance, but not intentions. Against that backdrop one might reach an uneasy truce with the militant Zangids.

Fast forward 32 years later. Goblinoid Games has purchased the Starships & Spacemen property, and plans to continue these classic voyages today and into the future! The original core rule book will soon be brought back into print through print on demand, and is already available at our online electronic stores in PDF format.

In the near future, we will release a new revised second edition of Starships and Spacemen, expanding character information and planet-side adventuring. The system will be adjusted slightly to make it fully compatible with Mutant Future and Labyrinth Lord. If you are a big fan of the original rules, have no fear. Those rules will remain in print, and future modules and supplements will have stats for both systems (though they are very similar to begin with).

Join us as we carry out missions in the final frontier. The Federation of Allied Worlds is recruiting. Join the Federation Space Fleet, explore exotic new worlds and make contact with alien civilizations!
Posted by Dan of Earth at 4:01 PM 15 comments:

AEC shipping to the warehouse

The print run for the Advanced Edition Companion shipped off to the warehouse yesterday, so we are a little ahead of schedule! So you should be seeing AEC in hobby shops earlier in May rather than later. I also will have copies on hand for sale direct to retailers, so look for Noble Knight to be restocked probably by early next week.
Posted by Dan of Earth at 8:40 AM 4 comments:

I've been on a Star Trek kick ever since I met up with Steve Zieser a while back at a convention and we played Federation Commander. I'm a big fan of the original series and the animated series. Granted, the acting is strained at times, dare I say a bit exaggerated? But nonetheless there is just something about it that seems so much more interesting than a lot of the later series. Part of it I think is that the crew went on adventures.

Sure, the props are hokey sometimes, but they get an A for effort. The hallmark of the original series is the crew going planet side to engage in various shenanigans. I actually do like The Next Generation in many ways, which is why I started watching it from the beginning again recently. I hadn't seen as many of the earlier episodes for a long time, and I was struck by how much the first season and a lot of the second season actually did have a lot of that original series feel. The women even wore similar short skirts in the first few seasons. Even though I think there are a number of excellent episodes in later seasons of TNG, the overall trend became less about going on adventures and more about unusual situations on the ship, mostly cerebral sort of problems, with a very heavy reliance on making up more and more technobabble to create a problem to which the crew needs to find a solution. So what I'm getting at is that rather than go to new worlds more often (and they do sometimes, don't get me wrong) where they find adventure, instead we are introduced to more and more exotic made up radiation, particles, etc. that wreak havoc.

And, we cant forget, forehead proliferation. In the beginning of TNG it was neat in a way how the makeup looked. But after a while I started to cringe whenever a new alien is invented, because they always are completely human except for a weird forehead. It starts to get ridiculous, and I can image a bunch of writers and makeup specialists sitting around trying to figure out how many sorts of unique forehead prostheses can be made. It just became too silly. I could submit a number of other criticisms and present arguments about how I think a lot of TNG is actually more racist than the original series, and promotes an incorrect perspective of cultural and biological evolution, but I'll abandon that for the moment. I have to write academic stuff often enough that I feel too lazy to do it here.

Coming back around to the subject of RPGs though, I think the original and animated series of Star Trek are great models for how one might set up a sci-fi campaign of this type. Hmmm, come to think of it I'm not sure I've watched all of the episodes yet from my animated DVD series set. I better go do that!
Posted by Dan of Earth at 10:43 PM 10 comments:

Just a reminder that the LLS April newsletter will be going out this weekend, so if you are a Society member and you have an essay or some other contribution (new monster? new magic item? recipe for kobold burgers?) send it on to me for inclusion! I'll need contributions by Saturday (April 10) morning. Also, if you are a publisher with an announcement, calls for playtesters, or have an ad you want to run drop me a line. These are always free!

...and if you're not a Society member yet, what have you been waiting for? Don't make me send the Recruitment Squad of Orcus to your door. When they knock they have more to deliver than just pamphlets!
Posted by Dan of Earth at 9:15 AM No comments:

Advanced Edition Companion off to the printer! 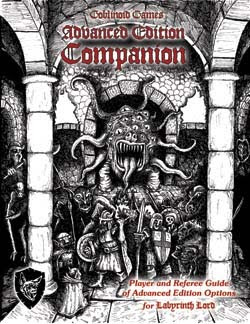 I got the printer all squared away for the AEC print run that will go into distribution. It took longer than I expected, but these things always do. Look for a release of the AEC into your local hobby store sometime in May!
Posted by Dan of Earth at 8:52 AM 13 comments: