Yes, it's that easy! Let me explain. What follows is a synthesis of my personal experience reading and playing these games, as well as from reading various posts from the relevant creators of these games.

The original D&D game was closely tied to Chainmail, the rules for miniature mass combat. The core classes were the fighting man, the cleric, the magic-user, the elf, the dwarf, and the halfling (yes, race-as-class). The elf was a unique class, a bit vague in description but most people interpreted the elf to be something of a dual class character (fighting man/magic-user) that only had access to one set of class abilities each day. As many know, these rules were spread among three books. There were many vagaries in descriptions of, well, everything. Partly this is because there was a lot of excitement when the game was being developed, and it ended up going out the door as a rush job. In the current "old-school" climate it will be unpopular to say this, but many or most inconsistencies and vagaries in OD&D are not because it was intentionally left to be house ruled or "imagined the hell out of." That was for the game in general, and yes for rules not covered, but I'm talking about something else. Many of the rules vagaries were simply oversites or failures to anticipate what details would be most needed in play, or by simple error of ommission. This of course is understandable, because the game was revolutionary and treading new ground. By no means am I an OD&D hater, I just think it is appropriate to look at it in its historical context, not the romanticized context many have for it now, which is the only reason I bring it up.

Then the various supplements started coming out. Each one added more complexity to the game, not just in new classes or magic, but in the way attributes affect the game and in the assumptions of "power level." The monsters become more powerful, able to deal more damage.

Then, for reasons that may forever lie in the mists of time and lawsuits, OD&D underwent the "great divide." The rules had become a mess anyway, and reorganization was in order. Couple that with the pending Arneson lawsuit, and it was seen to be desirous to sort of "split" the game, not unlike Danny DeVito and Arnold Schwarzeneggar in the movie "Twins," so that all the genetic garbage went to AD&D, and all that was good and wholesome went to the Moldvay/Cook/Marsh D&D (just kidding!).

So, most of what was seen to be "derived from" original D&D went to Moldvay/Cook/Marsh. Much of the added material from supplements, with the added complexity, went to AD&D.

There never actually was a "basic" D&D, just D&D and AD&D.

What was the result? The main result was that the core OD&D rules went to Moldvay/Cook/Marsh virtually unchanged. The thief class came, too, and the elf was made into a sort of "multiclass" fighter/magic-user. But largely if you ignore the thief and the elf, you have a revised, clarified OD&D in Moldvay D&D.

Meanwhile, AD&D added the greater complexity of separate races and classes, bumped all the HD up so the characters are tougher, and added other detail to monster stats, PC stats, etc. All-in-all, probably the only true mechanical incompatibilities, aside from the greater complexity in general, between D&D and AD&D was that time works a little different in AD&D, and AD&D has a 0-10 AC system instead of the 0-9 system handed to D&D from OD&D.

Yes, this is somewhat simplified, but not too much so. I'm painting with a broad brush. There are people who could list various little details that are different among these additions, but I'd argue that they are largely irrelevant to most people, and those things are not noticed in play. There's a reason so many people never realized D&D and AD&D were "two different games" back in the day, and played by mixing the two. Most people actually played AD&D pretty much as outlined in Moldvay D&D, except with the added classes and races.

These are the essentials of the three-pillar lineage.
Posted by Dan of Earth at 8:46 AM 5 comments:

Not to beat a dead horse too much, but I thought I'd chime in with just a brief comment on the recent debates raging in the "old-school" blogosphere regarding the term "old-school," what it means, or should mean, etc.

In a nutshell, that's all old news.

Walk with me on a little tour. Open another tab in your browser, and paste this link...

Now click on the link to the left for "Genre."

Scroll around a bit then tell me which of those 500+ products you think are "old-school."

Yeah, that's what I thought.

Before RPGnow merged with Drivethrurpg, that category pretty much only held OSRIC products, with a few stragglers from other areas. After the merger, it is a full-fledged "genre." The OSRIC and Labyrinth Lord material would be completely drowned were it not for the fact that they gave them their own categories. I mentioned in my interview from Knockspell #2 that the term "old-school" will pretty much just become a commodity. I wasn't really correct in that, because it already is.

But that's all old news. It's been merely a commodity since the birth of 3.x. The term "old-school" was really burned into meaninglessness long before the old-school "movement" (does that make anyone else chuckle a little?)

Long before many 1e compatible products were being created commercially, the old branding was already being "hijacked" for "old-school" 3.x use. By the time we showed up on the scene it was already too late to make it mean anything. No one who cut their teeth on 3.x can really be expected to "get" where we're coming from. Our crusty 1e format looks just like the crusty 3.x Goodman Games module format. What's old-school?

To me, it's pointless to spend energy trying to wall off old-school. Just let it go. It is far more productive to talk about specific games and how we like to play them, rather than create a hypothetical category of game. Besides, we're spinning our wheels by trying. Many people, when it comes down to it, don't give a crap about what the system looks like so long as the cover art tickles the old-school funny bone and the ad text claims retro-heritage. It can be poorly written, have miles of errata, not be as advertised, etc. I can't count the number of posts I saw around on forums from people who were never interested in Hackmaster 5e* before they saw the Erol Otus cover art. But slap an Erol Otus cover on something and it becomes old-school. The point is, these things are all shallow anyway.

*Before I'm bombarded by comments about how HM 5e will be a great game, I'm not denying that it will be. Will it be old-school? Well if we could answer that this debate wouldn't be happening.
Posted by Dan of Earth at 6:47 PM 2 comments:

When Moritz Mehlem wrote to me asking whether I'd be interested in a German translation of Labyrinth Lord, I was thinking the usual thing. I've been contacted by various parties interested in translating Labyrinth Lord, parties representing five languages to date, and most disappear in the ether. It's a lot of damn hard work writing this stuff, tedious, and takes time. It's no wonder people are enthusiastic at first but then at some point realize the scope and abandon it.

Well, I should have known better than to even briefly entertain the idea that the Germans would do the same. Some of you may know that Moritz writes material for Labyrinth Lord, published with my good friends at Brave Halfling Publishing. He assembled a team of like-minded people and had the Labyrinth Lord rules translated in a matter of just several weeks. We set a goal of making the book available at a major gaming convention in Germany (Moritz, maybe you could step in with a link, and a link to your interview?), which occured in April. We really came down to the wire in getting this layed out, edited, and books ordered in time. There were moments when I was kind of freaking out (which may have been partly because I was still in India at the time) but through everything Moritz was always calm and optimistic.

We did it. Moritz was able to present Labyrinth Lord for the first time at this convention, along with a great array of Brave Halfling products in German. He sold a very respectable print run there, and after now fixing some errata the Labyrinth Lord German translation is now available to all. It will enter the "psuedo-distribution" plan that makes it available at Amazon, Barnes & Noble, and many other online vendors that are hooked into this system. We may work out other things as well. Right now I'm offering it at a very low price, but come April 1st it will have to be raised to meet distribution prices.

This is a significant development for the Old-School Renaissance. Until now, development of Labyrinth Lord products has largely been limited to the US and the English language (with one very notable exception). But now I think only time will tell what might happen since the retro-clone phenomenon has started to spread to other countries. The revival is only beginning.

...and now a shout out to the translators who worked so hard...

Artists who make it happen

I just want to give a shout out to some great artists I've worked with over the last few years...

...and finally an up and coming star of old-school art:

These guys have been great to work with! I can boast that each artist I've hired has been reliable, friendly, and 100% professional. I think people sometimes underestimate the effect art has on a product. Many people make choices about which game system to use based solely on the way it is represented by cover art or interior art. Art can grant a perceived "feel" to a game, even granting interpretation to text that otherwise wouldn't be.

Thanks guys!
Posted by Dan of Earth at 9:06 PM No comments:

Over the last few years I've been contacted maybe half a dozen times by people interested in making some form of video game based on Labyrinth Lord. As far as I know, no one has followed through on it, which is a shame, because I'm a big fan of retro console gaming too and would love to see someone develop something in the same vein as this: 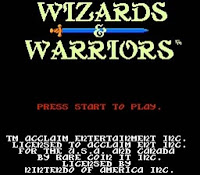 I like to play this game maybe once or twice a year now, straight through, while sipping a few beers. I've occasionally tinkered with the idea of trying my own hand at writing a game. There are a few packages out there that aid in making games compatible with either the NES or the Atari 2600. Batari basic for the 2600, and this site for making NES games.

The problem is that even though I did a certificate program in C++ several years ago (so I can fumble around with programming if I have to) this is a whole other animal. Programming is only one challenge, you need artists and people who can make music, for starters. Not to mention the learning curve would be too steep for me at this time, with writing RPG books and of course pesky real life writing tasks.

None-the-less, I sometimes fantasize about new retro-fantasy console games like Wizards & Warriors being released. If anyone out there is up to the task, especially for an NES compatible game, drop me a line. The free trademark license for Labyrinth Lord could be applied to such a product, and I think it would do pretty well.