Starting today all backers have access to the draft of MAJUS prior to final layout with art. This is provided as a thank you to all supporters, and so that you can get right into enjoying the game before the final version is finished. Current backers please check today's update (for backers only) with download instructions. Future backers, once pledged, can read Update 2 from the Kickstarter page to find instructions.

Have a great weekend!
Posted by Dan of Earth at 7:59 AM 2 comments:

Goblinoid Games has launched a Kickstarter to fund art and manufacturing costs for the latest Pacesetter game!

This time Michael Curtis, known for authoring the excellent books Stonehell, Realms of Crawling Chaos, The Dungeon Alphabet...and more...now brings us his magic noir game of intrigue and battles between Maji as they compete for the legendary Skein. MAJUS uses the classic Pacesetter System, the same system used in TIMEMASTER and SANDMAN.

Visit the Kickstarter project page for more information.
Posted by Dan of Earth at 6:08 AM No comments:

In case you haven't seen Jeff's twitter feed (Faster Monkey Games), he posted a pic of the Faster Monkey/Goblinoid booths from Gary Con. I wish I could make it this year, but hopefully next year. We combined our booths and I think they look great! 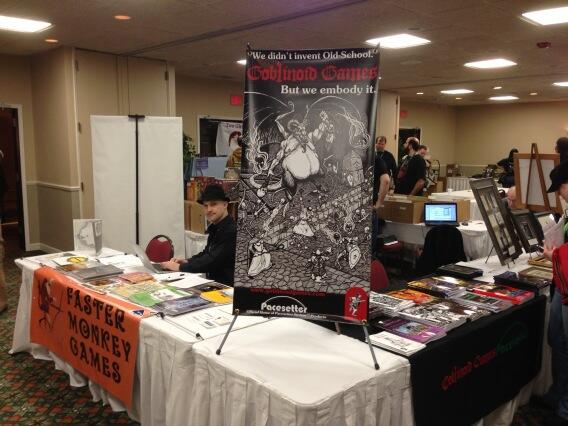 For those interested, I just want to confirm that all hard cover copies of Labyrinth Lord and the Advanced Edition Companion that were ordered through the Dwimmermount Kickstarter shipped today. The PDFs were delivered several months ago. I also want to make sure people know that James Maliszewski did in fact pay me for all of the orders. I asked him to deliver the money for this long back, well before his personal difficulties arose, because I wanted to ensure that I would be able to deliver the books in case anything unforeseen happened. At the time it seemed unlikely there would be any snags, but I was sort of looking ahead in a paranoid fashion I guess, and we now know that snags did in fact arise. Although I have every confidence James will eventually complete and deliver Dwimmermount, it is now clear that Dwimmermount may not be fulfilled for some time. In light of this, I want to take care of my supporters and customers by fulfilling this one component of the Kickstarter that I have control over. I did take some hit due to unforeseen shipping expenses associated with this, but I did not take an overall loss. That's why even though some customers very generously offered to pay for the additional shipping, I have declined those offers. As a supporter of Dwimmermount myself I know many people already have a lot of money invested in the project.
Posted by Dan of Earth at 2:30 PM 8 comments: