Goblinoid Games Travels Back in Time! 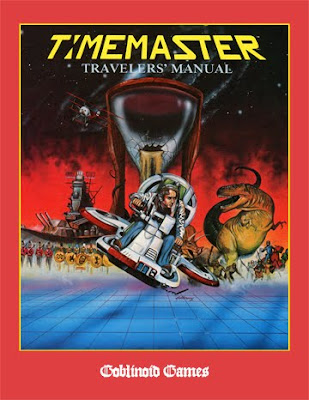 Goblinoid Games has always taken inspiration from the spirit of the 70s and 80s, publishing retro games such as Starships & Spacemen, Labyrinth Lord, and Mutant Future. Now we are pleased to announce that Goblinoid Games has been recruited into the Time Corps and is traveling back in time to bring a new classic title into the family.

Goblinoid Games has purchased the rights to TIMEMASTER: Adventures in the 4th Dimension! Originally published by Pacesetter in 1984, TIMEMASTER was an innovative RPG for its time (pun intended), presenting one of the earliest percentile “chart-based” game systems and a heavily supported and playable game of time travel; a feat few have been able to repeat. TIMEMASTER never suffered from the commonly perceived problems of time travel games, as it set out a very playable premise based on a number of “laws” of time travel, and infinite universes. A referee can run highly accurate historical games if desired, or fudge the details since it is in the distant past of the setting or even in an alternate timeline.

Lurching into action, your battered chronoscooter crosses the void of time and space. Another lurch, and the vertigo fades. The countryside comes into view. Knights in armor battle, clanging sword against shield, and then someone blasts at your neck with a laser beam. Once again, all of Time is a mess, and as an agent of the Time Corps, you must set this world straight or die trying! Adventure to any place, any time, in this universe and beyond! The TimeMaster Roleplaying Game makes you master of the "Fourth Dimension", guiding you to the ultimate adventure in history, legend, and science fiction. fight cunning aliens and savage renegades who twist Time to their own purposes. Only skill and wit stand between the world you know and absolute chaos!

The current time in the game is in the 72nd Century, leaving a wide swath of time between (our) today and the future for the referee to design. History in your campaign could have taken various paths over such a vast time period. For example, characters could go back to the beginnings of interstellar travel, or the post-apocalyptic period following the blights and radioactive fallout of the third world war, if you envision your milieu following that timeline. The possibilities are quite literally endless.

Join the ranks of the Time Corps, and you can be the Master of Time!

The TIMEMASTER product line is currently available in electronic format, and in the coming months the line will be released via print on demand. Note: the electronic files currently available are identical to what has been offered previously. As the books become ready for POD the electronic files will be updated as well, and will be much higher quality. Anyone who purchases the current version will be able to download the upgrades later free of charge!

For people unfamiliar with this game or who just need to fill gaps in the product line, the entire electronic product line is being offered at 60% off the regular electronic price for a limited time! The product line currently includes the original rule set that included a rule book, sample adventure, and campaign guide in addition to 12 modules and an indispensable expansion book.

Over the next year we plan to support the TIMEMASTER product line in several ways, so watch for future announcements!
Posted by Dan of Earth at 3:49 PM 13 comments:

Mutant Future sold out in distribution

The first print run for MF that went to distribution has sold out of the warehouse...more on the way soon!
Posted by Dan of Earth at 8:45 AM 12 comments:

Things are moving along toward a release of STAR EXPLORER, probably late this month. I've decided to make the game available both as a PDF that can be assembled at home and as a print on demand game at The Game Crafter (all retail prices are yet to be determined). Because of the components available, the game surface of the POD version will be sized a little differently than the PDF version. The PDF version is slightly larger. The game board for the POD version will be printed on two 10" x 16" boards that will be placed side by side for play. As I understand it the boards are not folded, they ship in a box to fit their size, so this should make it easier to set them side by side and extend the life of the components.

Here is a preview of the play surface. 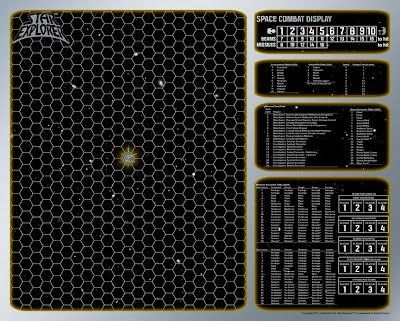 Many people may have noticed over the last few years that the "retro-clone backlash" has been building. Increasing accusations of a lack of innovation, contempt for not "getting on with the times" and other variations of these arguments have suggested that retro-clones should not exist or have no place in the gaming world of today. Some publishers wanting to break into the market created by the growing interest in retro games try to distinguish themselves by "innovating" 3e lite in different ways for new RPGs.

I've always prided Goblinoid Games on being responsive to customer demand, so after much soul-searching I've decided to discontinue Labyrinth Lord in it's current form, and revise and re-envision it with a stronger 3e lens. It's time to adopt the superior rules that have been developed by better-informed game designers! But wait, this won't be yet another retro-clone!

There are a number of similar games out there already, and others in development. There are already 3e lite versions that try to present a pseudo-1e or classic feel with the innovative and updated 3e mechanics, and still more in development that use some aspect of the original game as a spring-board, such as reinterpreting the entire game based on Appendix N of the 1e DMG. I'd like to take advantage of a spin like that before someone else beats me to it, so the new Labyrinth Lord will be totally redesigned taking inspiration from Appendix J: Herbs, Spices, and Medicinal Vegetables.

What if Gygax and Arneson had not been quite so interested in medieval battles and weaponry, but had degrees in botany instead? What if they were less inclined to war games but instead spent their Saturdays creating tinctures and tending their herb gardens? Think about it. No really, think about it! Not only that, but what if they didn't have to design all the rules themselves starting from proverbial sticks and stones, but could instead base their game on "more advanced technology," if you will, that already exists in the 3e SRD?

If you can wrap your mind around all of those alternative histories, you start to get a feel for what Labyrinth Lord: Herbalists and Vegetable Adventurers is all about!

You're not a hero. You're a vegetable in a world of vegetarians. You battle for your perennial lives in dank light-less worlds inhospitable to photosynthesizers, against creatures with an insatiable hunger for plant-based nutrients!

Traditional Vancian magic, classic races, and standard classes will be removed. All races will be built as race-classes on the concept of sentient vegetables. Labyrinth Lord: Herbalists and Vegetable Adventurers will feature the following classes:

In the coming weeks expect to find previews of some of these classes, and a sneak peek at some of the new monsters that will strike fear into the plant vascular systems of characters! Here are just a few of monsters you will see:

This is an exciting time for retro gaming! Appendix J!
Posted by Dan of Earth at 5:42 AM 11 comments: