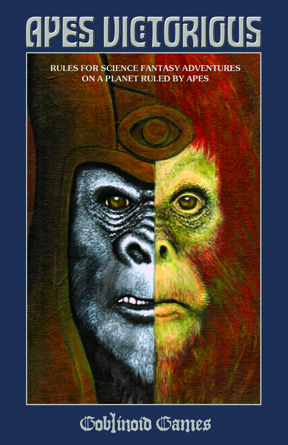 By Daniel Proctor with additional material by Tim Snider. Cover by Mark Allen, interior illustrations TBA.
Posted by Dan of Earth at 11:21 AM

Superb! This'll be a must-have for me!

Will there be a Kickstarter for this? Sorry can't think of a good ape or ape movie pun right now. ;)

Don't worry James you'll get that too! Haven't decided about a Kickstarter yet Mike; is that something you would want?

This has me all kinds of excited!!

Handfuls of feces for flinging excited. The KS idea is nice if you really wanted to deluxe it up, art and such. Something I would be very happy to contribute towards.

I can not wait to get my hands on this, you damn dirty apes!

I swear, just last week I was standing in the kitchen when I suddenly got the urge for some POTA gaming... that must have been the subdweller psychic marketing team hard at work.

Playtesting is underway, already made some tweaks. The game is shaping up to be pretty awesome IMHO! Basically at this point we just need to finish the intro adventure and editing. Also need interior art.

Damn this looks awesome. Hate to say it, but this may be the most exciting GG product I've been hipped to since the Advanced Edition Companion.

Which is to say: pretty darn exciting.

I hope it can live up to expectations!

This fills an ape-shaped hole in my heart that I didn't even know existed.

A bit behind on the intro adventure so we may be lat summer or early fall for the final product but I think I'll do a kickstarter in late July and backers will get to download the complete draft without art yet.

Looking forward for this!

Sweet! Can't wait for this!

Can you make a game like this based so strongly off the movies?

Considering that Dan wrote a scenario for Terra Primate for the Unisystem, I am sure he knows what he is doing.

Plus, can't wait for this!

Any news on this one? Summer is pretty much over now.

@Marc: Hit some personal snags but the kickstarter will come soon

Thanks, Dan. Looking forward to it. Is the game largely written, i.e. is this going to be a Kickstarter to fund the art and printing, or one to fund you while you write it?

Already written I just have some loose ends to wind up.

Good to hear, Dan. Looking forward to sending some money your way.

I don't anticipate ever doing a Kickstarter where the writing isn't finished before hand.

Quite, that way lies madness.

I am really looking forward to this...more goodness to add to the already awesome and wacky world of LL! Thanks Dan.

I was looking for, mostly because there were not any dealers there that had quality 15mm medievals.

We make it easier for you to manage outbound and incoming online interactions. With our efficient marketing strategy we help you to initiate a business plan
Digital Marketing Company
Web Design Company

Like!! I blog frequently and I really thank you for your content. The article has truly peaked my interest.
the post was excellent and good.we made the most of the article,thank you
Naagin 5

Victoria Furniture offers you a unique blend of contemporary and classical furniture, accessories and a fully furnished house.
home furniture in pakistan
Furniture Shop In Lahore

As much as home inspections are important, commercial property inspection in maryland also holds a vast importance as offices are considered to be the second place where people spend most of the time in a day. It is very important to get the place inspected thoroughly as EPA reported around 21000 deaths annually due to radon exposure which causes lung cancer in non-smokers. Radon inspection cost in maryland is nothing as compared to the price you will have to pay when prolonged radon exposure will result in causing major health issues. Radon is a colorless odorless gas present in the air all around us in trace amounts but it becomes a hazard when it gets entrapped inside the house and the residents of the house are exposed to it. The safe levels of radon as suggested by EPA is 4pCi/l and the amount more than it is alarming and you need to install a radon mitigation system at your commercial property as soon as possible.

It is a common known fact now that radon is a very harmful gas which can get trapped inside our house and then our lungs if inhaled for a longer period of time and it has known to cause lung cancer in non-smokers. In fact, it is the second leading cause of lung cancer after smoking. Due to this reason and as stated by EPA, radon exposure leading to lung cancer takes around 21000 lives annually which is a very alarming figure and this is the reason that without radon testing inspection in Gaithersburg md is incomplete. When a person is looking for a successful home inspection which will make it easy for him to understand what is wrong with his house and what measures should be taken in order to get rid of the problems found, he looks around for a best home inspector to do it for him, he searches words like home inspectors gaithersburg md in order to find a best options ar at least some good options to choose from, but we have made it easy for you. At Top to Bottom Services, we ensure that you get the best home inspector who will help you throughout the process and will familiarize you with what is happening and deliver maximum satisfaction. You should put 5% of your trust in us and we will gain the 95% back.

When it comes to our homes and their safety, we always want the best. This condition can be applied anywhere and you will not be surprised to see that this is actually the truth. So if we put the inspection of our house in this list, it is obvious that we want quality home inspection in maryland which will ensure that we are free from all the problems by the end of the whole procedure, no matter how many sessions it takes. Usually it's just one inspection but when there is an issue detected which needs more than one day or requires follow up tests, it can take some time hence we should be confident about the person or company we have chosen to proceed further with the whole process. If a person is looking for a home inspection company that will help him get rid of all the problems related to his house, he definitely wants the best. If he searches words like residential home inspector in gaithersburg md and is unable to decide from a number of options, we are here to make it easy for you. At Top to Bottom Services, there are a number of warranties and guarantees that will assure you that we are in safe hands and your investment on your dear house and the trust you have put in us will not go wasted.

There are many problems encountered by residents while living in a house which depicts that the house needs immediate care. Suppose the residents of your house are developing allergic reactions which makes our safe space at home a little hard to live. Home is a place where a person comes after a tiring day but what if he is not getting peace at his own place, what should he do then? A professional home inspection in gaithersburg md is always needed in order to make sure that the house where we are living is safe from all the toxins that may affect our health and all other factors that could cause damage to our property which was built with love and a huge amount of our savings. If you suspect something is present in your house causing your family to develop allergic reactions like stuffiness of nose or sneezing, coughing etc, call top to bottom services today and we will make sure to provide you a thorough home mold inspection in gaithersburg md in order to be sure if this is the problem that has been affecting you or there is something more grave present inside your house that needs immediate attention.

When a person feels that they have a certain type of problem present inside their house and they want to get it fixed, they are always anticipating best services in order to know that their house is perfectly safe and secure for them. People often Google words like home inspection services in maryland to know if they have a reliable source working near them which can provide them the best services available in the market. They also tend to rely on positive word of mouth from their close ones or relatives to check if they have taken these services before and how their experience was. It is always advisable for you in any case that you should opt for certified home inspection gaithersburg md so that you should know that the person coming inside your house is qualified, certified and reliable and you can trust them. We, at Top to Bottom Services, are proud to say that we have all of this and more in the box for you so book an inspection today and leave the rest to us.