CRYPTWORLD is a Pacesetter System horror game in which you play an investigator of the unexplained. Any kind of horror is possible, from hunting classic monsters to fighting the secret manipulations of interdimensional aliens, and much more! Be an independent hunter of the horrors in the world, or be a member of one of the several organizations provided, each with different motivations.

CRYPTWORLD handles many subgenres of horror. It is a complete presentation of horror rules, game advice, and creatures from different horror subgenres so that you can play any kind of horror game you prefer. Your characters can be members of one of the several example organizations that investigate the unexplained, rather than be limited to only one organization. This also means that there is no specific assumed game setting. 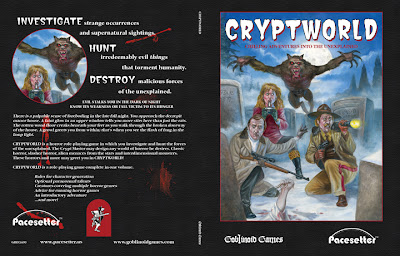 CRYPTWORLD and CRYPTWORLD: Chilling Adventures into the Unexplained are trademarks of Daniel Proctor.
Posted by Dan of Earth at 7:32 AM

Ooooo, I'm looking forward to this one!

This sounds awesome, and that cover looks great! Will there be rules for playing monsters included as well?

I've got a draft of a sci-fi game partially written, still have a couple chapters. It's nothing like Star Ace though.