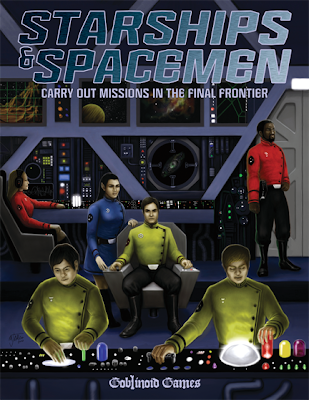 Carry Out Missions in the Final Frontier!

Starships & Spacemen was first released back in 1978, only the second science fiction RPG ever to be released.

This second edition of the classic game is compatible with Labyrinth Lord and Mutant Future. The best elements of the first edition have been kept--the classes and subclasses, the excellent starship rules, and the space adventuring rules. Classes, races, and abilities have been made more in line with Labyrinth Lord.

This second edition has elements that let you customize the style of play whether you prefer an "original series" feel, a "next generation" feel, or something in between.

You won't be bogged down by an over-complicated and detailed galaxy. That's one of the difficulties sometimes when trying to play in an established licensed universe. With Starships & Spacemen get just enough information to get going, and plenty of advice for designing your galaxy. Galactic space will be yours to customize.

Much like in Labyrinth Lord, in Starships & Spacemen you design your milieu. This is adventuring in space, not History 101!

Pledging at any level gives you access to the playtest draft and the playtest forums!
Posted by Dan of Earth at 3:39 PM

So excited! My pledge is made!!

Thanks Carter! Are you a member of the forums?

Yes, I am a GG forum member, though I am rather sporadic in swinging through there. I assume there will be some sneak peaks and pre-buzz over there, yes?

You can get the playtest draft as a contributor.