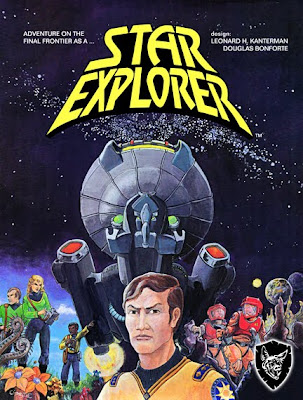 Goblinoid Games has purchased the rights to STAR EXPLORER, the role-play board game that takes place in the same universe as Starships & Spacemen. Originally published by Fantasy Games Unlimited in 1982, this classic game of space exploration has been long out of print and hard to obtain. The game is currently being converted to PDF format for download and home assembly, and should be ready to purchase at our online store within the next two weeks. Depending on demand, the game may be brought back into print as a physical product as well. The PDF release will feature the original green playsheet for people wanting the original, and a revised playsheet for those who want a fresh look. The rulebook will account for errata and minor rule revisions that have been implemented over the last 29 years.

From the back of the box:

Now you too can be a STAR EXPLORER!

In this game of exploration and confrontation you play the role of the Captain of a StarShip of the Federation. You are on a mission to explore several new worlds.

On the way, your StarShip may encounter the hazards of space. You may be called upon to perform your secondary mission of keeping the StarLanes free from pirates.

Although an uneasy truce exists with the Zangid Empire, each encounter with one of their vessels is potentially explosive.

Once you begin your voyage you must decide how your ship will be equipped. You must also choose your crew from the available manpower. You then set out on your exploration mission.

STAR EXPLORER is a role-play board game for as many as four players. It can even be played solitaire since competition is directed more against the universe as presented in the game than against the other players.

The player who completes his mission quickly and with a string of successful resolutions to encounters will do well.

A 17” x 22” mapsheet which contains the stellar display, space combat display, and a number of handy reference charts. This will be provided as four tiles for home printing, and as one sheet for printing at a print shop.

A 8.5” x 11” sheet of counters to be cut out that represent crew teams, ships, hazards, and planets.

A ship logsheet and planetary logsheet, to be printed for record keeping.

I have never even heard of this. I am intrigued!

I used to play this when no one else was up for Starfleet Battles (which was quite frequently). Definitely will be purchasing when available.

Excellent! This is really a nice solo game and it's a shame it was mostly overlooked at the time (and since!). It's been ages since I played it with friends. I seem to remember that the more players you had, it became almost too long, so it may be best played solo.

Congrats on branching out into a long lost love :)

Sounds good - but why would you buy the rights when you could just clone it?

Perhaps especially when the game itself is an exercise in not getting the rights :)

If you want suggestions for other old semi-RPG games, Sorcerer's Cave.