I was perusing the used movies for sale at my local Blockbuster last week, and came across some copies of Gamerz. There were only two left, so I picked up one for myself and an extra one to give away. I think this is a great gamer movie, so if you're interested in getting a free used copy, check out this contest! I'll ship it anywhere in the world, but be aware it has the US region code.

To enter the contest, submit in this thread a room description for one (1) room in a 1st level of a dungeon. The description must be no longer than 300 words (not counting stat blocks, which must be for Labyrinth Lord). In one week from today, Aug. 24th, submissions will close. Then I will set up a vote thread and the community will have 3 days to vote for the winner. I'll send the winner the DVD.

If we get enough submissions and people are willing, we'll compile these into a free PDF, so people can use it as a resource for determining the contents randomly of a room. 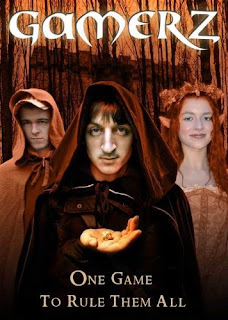 Center of room: 10' diameter pit of boiling goo, cage containing panther hanging from chain above. 1 in 6 chance panther will roar, attracting 4-7 kobold guards from sleeping chambers. If released, panther attacks any in room until stopped. Goo in pit causes 1d6 acid damage per round to anything immersed in it and has a 1 in 6 chance of spitting 1 hp of acid on those standing too close. Killing any creature in pit counts as a sacrifice to Chaos.

East Wall: altar with 2 potions of unholy water and one of poison. Items lain on altar become cursed (2 in 12 chance.)

West wall: Small coffer with needle trap in lock (1-2 damage) contains 2 bricks of incense (15 gp each) and one brick of Sleep incense.

Sorry about the deleted posts...

Area 5. Desecrated Catacombs of the Disciples: This rough-hewn room is 10’ wide and 60’ long, curved along a roughly 60-degree arc, with reinforced doors at either end; the southern doors have been forced. There are archaic frescoes depicting the lives of Lawful saints covering the chalky walls of the grave and crematoria niches. Far less violation of the interred has occurred here; in all, 12 bodies remain untouched and 16 urns unshattered; the bodies have funerary jewelry worth a combined 100gp. The urns, while small, are fine porcelain and centuries old, of great interest (and worth) to a dealer in antiquities. Shards from urns already shattered will be accepted by the nearby monastery to be consecrated as relics.

Three Xaos Cultists (rather their dried husks) have joined the corpses they violated on the floor near the southern door, slain by the guardian at 5a. All have glass vials of old poison (Save vs. Poison at +4 or die) on their persons, as well as kris knives long since rusted to uselessness. One minion also has a clerical scroll with detect good and cause light wounds in a scroll case carved from a dwarven tibia. Nearby are their abandoned bags of bloodpaint and ritual paraphernalia. Among the useless unclean trinkets are two tourmaline gems worth 25gp each.

The carved chalcedony devotional figurine (of a placid-faced young woman) in the niche at 5a is in fact an Animate Crystal Statue charged with protecting the graves here. Any attempt to disturb the graves in this hall will cause it to animate and attack. It will cease if its adversaries retreat outside of area 5. It will not interfere with the removal of urn shards.

As you enter this 30x30 room, the smell of decay and death overwhelms you. The room feels damp and cold, and the walls, floor, and ceiling are covered in moss and mildew. In the center of the room is a large pile of garbage dotted with patches of mold and mushrooms, perhaps this was a dump or latrine for the former inhabitants of the dungeon. Sticking out of the pile you can see all manner of refuse including mud, broken wood, body parts, and the glint of something shiny. The slow, solitary trickle of water echoes throughout the room – drip, drip, drip.

Once the rodents emerge and attack, the smell of death and decay becomes so offensive that the PCs must make a constitution check or lose their next attack. The lost round is spent vomiting. The constitution check is made only once.

The garbage pile contains the following baubles collected by the rats: 438 cp, 235 sp, 124 gp. There are also the remains of a partially eaten magic-user. His gear can be found with a thorough search and includes the following: a small steel case with a Magic-User Scroll: Detect Magic, Magic Missile, and Light and a ring in the form of a plain gold band with a rampant lion shield crest made of rubies. This item functions as a Ring of Shield (as per 1st level spell, usable 1/day by magic-users only, 3 charges remaining, non-rechargeable).