Ninjas & Superspies was my second love

I was 8 years old when a neighborhood friend brought over the red boxed set of basic Dungeons & Dragons. That summer I think we must have played every day. We had no idea what we were doing, and my main character "Reese" (named after the guy in the first Terminator who goes back in time...) had a +150 long sword that he kicked much ass with. One time he even punched Orcus to death with +50 gauntlets.

See, we mixed the basic game with AD&D, not knowing they were different games, as many people did when they got started. After a time though, smashing much face with ungodly powerful weapons became stale. Our characters even went forward in time to get machine guns and chewing gum (and motorcycles), then went back to "the past" and blew the hell out of some dragons, then lobbed a grenade or two for good measure.

Which got me thinking.

If we can play this kind of game with fantasy people, why not modern people? So I promptly started designing my own game. I think I was 10 by that time. It was a total rip off of D&D 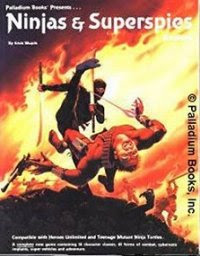 This game had it all! Ninjas! Superspies! Cyborgs! Jawbone telephones! Enough SDC to take a bazooka blast!!

Er...well, it was cool for a while. I guess it was believable that you could get stabbed a million times by a dagger, but after a while (and we played this for years) I just couldn't wrap my mind around being invincible from anything short of missiles.

The tragedy of it is that these games really do rock. N&S is chock full of cool stuff. I absolutely love their system for designing spy organizations. For its day this was innovative stuff.

Anyway, all of these memories came flooding back to me when I saw that Palladium is now going to be selling a substantial number of their titles, even OOP titles, through RPGnow. I know there are various conflicting sides who claim this or that against Palladium, and I have no idea if any of it is true. All I do care about are those irreplaceable memories of kung-fu kicking with my 3 foot tall mutant rhino, or robbing banks with my rogue cyborg. We mixed N&S and TMNT, so that we could use all the cool martial arts from N&S.

The first real gaming I did post-D&D was all done in Palladium games. It began with a mix of Beyond the Supernatural and Ninjas & Superspies, but soon veered off into a cyberpunk universe based on the TMNT and N&S rules. I still run/play both of these games today (although less often than I used to) and even though the Palladium system is far from perfect I still enjoy it just as much. Sometimes it's good to play a game that's a little gonzo. :D

(BTW, the getting "stabbed a million times" problem is easy enough to house rule: anything that does penetrating damage bypasses SDC and goes straight to hit points. Or you can do what we did back in the early- to mid-90's and use the hit location charts from Bureau 13: Stalking the Night Fantastic; anything on a hit location that isn't an asterisk is HP damage. To this day, our games are chock full of scarred, half-crippled eunuchs. :P)

N&S is fantastic. I am not a Palladium gamer - I only have the PFRPG book and N&S, but I've read N&S from cover to cover at least twice. Lots of great stuff in there for any modern campaign.

While I don't think I'd want to use the Palladium system, I'd love to take a lot of the material presented in the book and do a campaign based on J.J. Abrams' Alias. I think the super tech, martial arts, and ridiculous stunts in that series would fit a N&S campaign perfectly.

Yeah, that pesky SDC thing really sort of throws a cog into the whole Palladium system, IMO. I was thumbing through an old copy last night of the 1st edition revised Palladium Fantasy book. I never played this, and man this book is poorly organized and confusing. I don't remember N&S or TMNT being this disorganized...but I need to dig those out again. They're buried in boxes somewhere around here...

I am a serious Palladium fan and collector it's a beautiful system and like all systems it has it's flaws.
Mmm, SDC is a bitch isn't it. I personally use a combination of dice multipliers on called shots and there is the penetration numbers for the rounds that I use as add ons per die of unarmored opponents. The thing is they've only addressed these situations in the Rifters or online.
Palladium is good at compendiums then perhaps they should make A rules compendium just for modern combat.